Where Is the Little Blue River located?

The Little Blue River is a stream that begins in southern Jackson County, Missouri, near the town of Grandview and empties into the Missouri river just of Sibley, Mo. Despite its name, its not a tributary of the nearby Blue River, nor should it be confused with the Little Blue River of central Kansas.

What's In A Name?

The first names given to the Little Blue River by European trappers and traders were 'Hay Cabin Creek',  'Cabin Grass Creek',  and  'Straw Hill River'.  These early names were apparently applied because of the arbor-like grass lodges constructed along the banks by native Americans or, perhaps, others. William Clark, John Ordway, and John Whitehouse all mention this stream in the journals they kept during their famous expedition in 1804.

Descriptions recorded in the first General Land Office Surveys in 1826 show a large tract of native prairie near the mouth of the Little Blue River that may have been the likely source of material and location of these grass cabins. Native prairie grasses in this area usually included Big Bluestem, Indian Grass, Switch Grass, or Prairie Cordgrass.  These grasses can easily achieve 6 to 7 feet of height and would have been especially thick and tall in the moist and fertile river bottoms along the stream near the Missouri River.

'Hay Cabin Creek' must have been still in use as late as 1839 when Joseph Nicollet recorded both this name and 'Little Blue River' on his maps of the Missouri River. 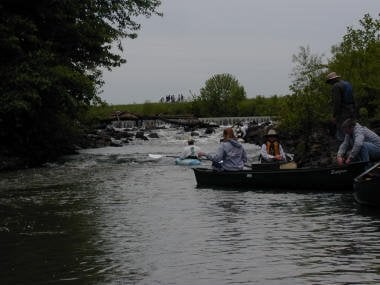 The Battle of the Little Blue River was a battle of the American Civil War, occuring on October 21, 1864 in modern day Jackson County Missouri during Price's Raid. Maj. Gen. Sterling Price's march along the Missouri River was slow, providing the Union Army a chance to concentrate. Maj. Gen. William S. Rosecrans, commanding hte Dept. of the Missouri, proposed a pincer movement to trap Price and his army, but he was unable to communicate with Maj. Gen. Samuel R. Curtis, commander of the Dept. of Kansas, to formalize the plan. Curtis was having problems because many of this troops were Kansas militia under George Dietzler and they refused to enter Missouri. However, a force of about 2,00 men under the command of Maj. Gen. James G. Blunt did set out for Lexington. He met the Confederate troops at Lexington on October 19th and slowerd their progress, but ultimately was defeated and had to retreat. The next day, Blunt's troops arrived on the Little Blue River, eight miles east of Independence, Mo.

The Union force prepared to engage the Confederates again in a strong defensive position on the west bank. However, Curtis ordered Blunt into Independence while leaving a small force under Col. Thomas Moonlight on the Little Blue. The next day, Curtis commanded Blunt to take all of the volunteers and return to the Little Blue. As he neared the stream, he discovered that Moonlight's small force had burned the bridge as ordered, engaged the enemy, and retreated away from the strong defensive position occupied the day before, and crossing the river. Blunt entered the fray and attempted to drive the enemy back beyond the defensive position that he wished to reoccupy. The Untion troops forced the Confederates to fall back at first but, their numerical superiority took its toll in the five-hour battle. The Federals retreated to Independene and went into camp there after dark. Once again, the Confederates had been slowed and more Union reinforcements were arriving.